← We are looking for a new drummer
Skeelo farewell gig @ Anger Fest Vol.2 →

We are proud that we’ve got the possibility to organise the 2nd edition of our “Anger Fest” which will take place on 24th november 2017 at the Kulturfabrik in Esch/Alzette, Luxembourg.

We started the project last year to raise some money for a good cause. This year we will donate the benefits to “Give us a voice a.s.b.l.” (www.giveusavoice.lu).

We hope to see a lot of you again at this year’s edition so that a 3rd edition could be even better and bigger! 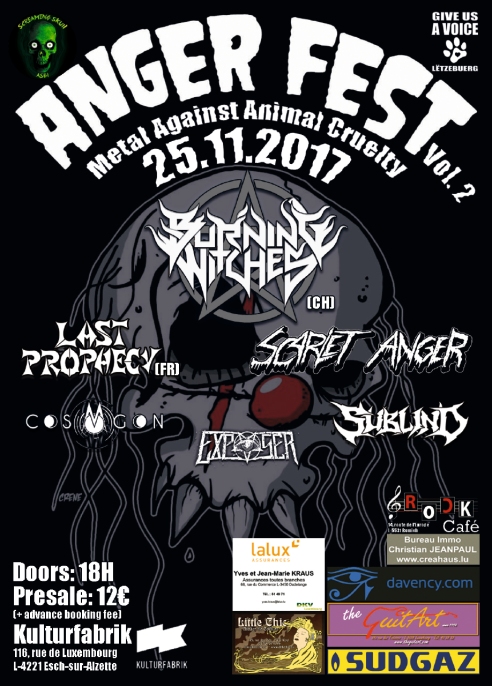 Scarlet Anger is a luxembourgish Thrash Metal band which was founded in 2007 by vocalist Joe Block and guitarist Fred Molitor. After a demo and two EPs Scarlet Anger have now released their first album „Dark Reign“ on May 11th. Their second EP „Kill The King“ was able to achieve some great notes such as 8/10 on metal.de, 5/5 on Unitymagazine.net or 4/5 on stormbringer.at. Moreover they appeared in magazines like Metal Hammer, RockHard, Legacy and Heavy. In 2011 Scarlet Anger got the chance to sign a deal with the label „Dust On The Tracks“. After all songs have been recorded and mixed at „Scarlet Anger Studios“ by guitarist Fred Molitor who created the artwork as well, the mastering was done by Jeff Waters from Thrash Metal legends Annihilator in „Watersound Studios“.
View all posts by Scarlet Anger »

Posted on November 17, 2017, in News. Bookmark the permalink. Leave a comment.

← We are looking for a new drummer
Skeelo farewell gig @ Anger Fest Vol.2 →